Plant Poisoning in Llamas and Alpacas

Llamas and alpacas are fastidious eaters and generally don't ingest a lot of any strange feed item. Nonetheless, accidents do happen both on the trail, and in the farmstead. Following are two examples of plant poisoning that illustrate some of the hazards. More details and information on other plants may be found in the references listed.

Oleander Nerium oleander is a beautiful ornamental, evergreen shrub or a small tree, native to the Mediterranean region. It was introduced into the United States many years ago and is now commonly planted in freeway mediums. As a potted shrub that can be moved inside during the winter, it may be found almost anywhere. Oleander's popularity is enhanced by it prolific sprays of white, pink, rose or red flowers, which bloom for many months of the year.
Oleander is one of the most poisonous plants likely to be encountered by animals. A fatal does may be as little as 1/3 of an ounce (7.5 gm) of green or dried leaves for a 30O pound llama. For most poisonous plants, an animal usually must ingest an amount equal to 0.5 to 1.0% of its body weight before developing signs of poisoning. In the case of oleander, fatal poisoning results from ingestion of only .005% of body weight. The ingestion of three medium to large leaves may be lethal to a llama, see table 1.

The poisonous principle is oleandrin, similar in action to an overdose of digitalis, or its more common commercial form, digoxin. Llamas and alpacas may also be at risk if they eat purple foxglove, a garden flower that flourishes in the cooler weather of the northwest and northeastern United States.
Llamas and alpacas may also obtain oleander leaves in a variety of ways. Rarely will they ingest leaves directly from the living shrub, because the green plant is bitter. Oleander grows rapidly, necessitating frequent pruning, and if cuttings or lawn clippings containing leaves are placed where llamas can eat them, the risk of poisoning is great. Dried leaves are more palatable than green leaves, but equally toxic. Poisoning once occurred when oleander branches and leaves were run through a shredder, and the resulting mulch placed in a flowerbed. The dried leaf parts blew into a pasture containing llamas.
Two recent episodes of oleander poisoning prompt me to remind owners of the hazard of having oleander shrubs, or any part thereof, anywhere near llamas or alpacas. In the first case, a llama was newly introduced (2 weeks previously) to a herd and a new pasture. The llama was noticed lying down and reluctant to get up. It also refused to eat. A couple of days passed before help was requested. The possibility of oleander poisoning was raised and became a factor when it was reported that oleander grew at the border of the pasture and, furthermore, a gardener had pruned oleander and burned a pile of the clippings in the pasture. Some of the branches did not burn, leaving dried leaves available to the llama. Other animals at the farm had avoided consumption of oleander, but the new animal was inquisitive.
A veterinary practitioner examined the llama and found an extremely rapid heartbeat and no stomach mobility in addition to the depression and anorexia. Supportive treatment was administered, but intensive care and surgery were not options. For the next four or five days, the llama vacillated from being bright and alert or depressed but finally rallied and began eating and moving about.
The second episode involved a herd of alpacas. A three-year-old female died suddenly. No necropsy was performed. A month later, another female, 2.5 years old, became depressed and anorexic. The animal was examined without conclusive results. It was treated according to signs and although seemingly improving, was found dead two days later. No necropsy was performed. A third weanling (18 months old) in the herd became depressed and anorexic. Because of the way it stood, as if it were lame on all four limbs, the examining veterinarian thought it had vitamin D deficiency (rickets) and treated it accordingly. The practitioner asked the owner if any oleander was on the property, and the reply was yes, but only at a great distance from the alpacas, and that there was no way the alpacas could have had access to it. Within 24 hours that alpaca died. A necropsy was performed on this animal, and samples were submitted to a diagnostic laboratory. The pathologist noticed degenerative lesions in the heart muscle, suggestive of selenium deficiency or oleander poisoning. A second weanling with depression and anorexia was referred to the Veterinary Medical Teaching Hospital at the University of California, Davis.
With a suggestion that oleander poisoning was a possibility, a newly developed blood test for the presence of oleandrin was performed and was positive. Fortunately for this alpaca, the ingested dose of oleander was not lethal.
Generally, oleander poisoning is an acute episode leading to the death of the animal. In these two episodes, at least one animal lived. The question as to what residual effects in the heart muscle could cause problems later on? The pathologist indicated that, had the animal lived, the degenerative lesions found in the heart would lead to scar tissue formation in two to three weeks, and if the effect on the heart was extensive enough, it could lead to poor cardiac function at a later time.
Except for depression and anorexia, the clinical signs noted in the alpacas were not the usual signs observed in other animals suffering from oleander poisoning. Typically, animals develop diarrhea, which may become bloody. Neither the alpacas nor the llama had diarrhea. If one listens to the heart carefully, over a long time period, various types of arrhythmia (including rapid heart beat) may be heard, but there may be periods of normal heart beat too. Ultimately, when the heart is no longer able to circulate blood satisfactorily, mucous membranes of the nose and mouth may become cyanotic (bluish). Muscle trembling may be seen and breathing becomes difficult. Death may occur within ten hours of ingesting oleander leaves or, as noted above, the animal may survive.
Sudden death is an uncommon occurrence, and obviously causes alarm in the owner. Any animal that dies under such circumstances should be necropsied. In geographical areas where oleander is normally found, possible access to the plant material should be explored and such information passed on to the pathologist conducting the necropsy. It is possible to identify even small pieces of oleander leaf in the stomach, which would be a definitive diagnosis. The only effective treatment for oleander poisoning is to remove the plant material from the stomach by surgery. Animals already showing signs of oleander poisoning are a poor surgical risk at best, so prevention of poisoning by eliminating oleander plantings in and around llama or alpaca facilities is a must. Lawn clippings and pruning clippings of any kind should never be placed where animals have access to them. In the case of the alpacas, further communication with the owner indicated that gardeners may have been responsible for leaves getting to the animals.

A llama packer shared a sad tale. Eight llamas were used for a trek into the Huntington Lake area in southern California. The animals were tethered in a meadow. One of the llamas became ill and in 48 hours was dead. The owners searched the meadow and found a short shrub that was later identified as alpine laurel Kalmia latifolia. It was evident that the llamas had eaten some of the shrub. All eight llamas had access to the shrub, but only one sickened and died.
Unfortunately, no list of poisonous plants is ever going to mention all plants that may possibly cause problems. If every plant that has been incriminated as being poisonous were to be included, the list would be unmanageable and not be helpful. The plant, in this case, is a member of the heather family (Ericaceae). Alpine laurel KaImia latifolia is also called mountain laurel, calico bush, or ivybush. Its cousins, the rhododendrons and azaleas, are known to be poisonous to livestock. Rhododendrons have been responsible for the deaths of a number of llamas.
The heather family is a large family and in California alone, there are hundreds of species. Most of the heathers are non-poisonous and many are edible (blueberries, huckleberry, cranberry). Manzanitas, along with other shrubs make up the chaparral plant community that forms a dense shrub covering of the foothills of both the coastal range and the Sierras_
Poisonous genera of this plant family include Rhododendron (rhododendrons, western azalea, California rosebay), Kalmia (alpine laurel, mountain laurel, lambkill, sheepkill. dwarf laurel, bog laurel), Ledum (Labrador tea), Menziesia (mock azalea, rustyleaf), Pieris (Japanese pieris) and Leucothoe (Sierra laurel, black laurel).
The poison found in these shrubs is the same in all the species. It is a complex glycoside, andromedotoxin or grayanotoxin. The clinical signs exhibited are essentially the same for all the plants and all the animal species that are affected. Signs include anorexia, coughing, choking, retching, foaming at the mouth, vomiting, colic, paralysis, depression, groaning, and muscle twitching.
How then can owners hope to prevent plant poisoning on the trail? Generally, grasses are not a problem. Most of the cases of poisoning have been caused by consuming shrubs. They should avoid tying llamas to trees or shrubs that are unknown to them. They should walk the area to be grazed or browsed to see if any unknown shrubs are present.
The next question should be, “But how can they hope to learn all the plants where they go trekking?” It may not be possible to learn all about them on a single trip, but a knowledge of the shrubs, trees and other plants of the area will enhance the wilderness experience. They should purchase some booklets on the plants and the wildlife of their trekking area. Most large bookstores carry such items. The gift shops of National Parks and National Monuments abound in nature books.

Another book with excellent black and white drawings is Livestock Poisoning Plants of Arizona by Ervin M. Schmitz, et al. This book is published by the University of Arizona Press in Tucson, Arizona.

Burrows, G.E. and Tytle, RI., 2001. Toxic Plants of North America. Ames, Iowa State University Press. This is the most comprehensive book available in the United States. It covers the botany, identification and medical aspects of all the poisonous plants in all species of animals. It is expensive ($175.00), but it is a large book (1342 pages, 8.5" by 11” format). 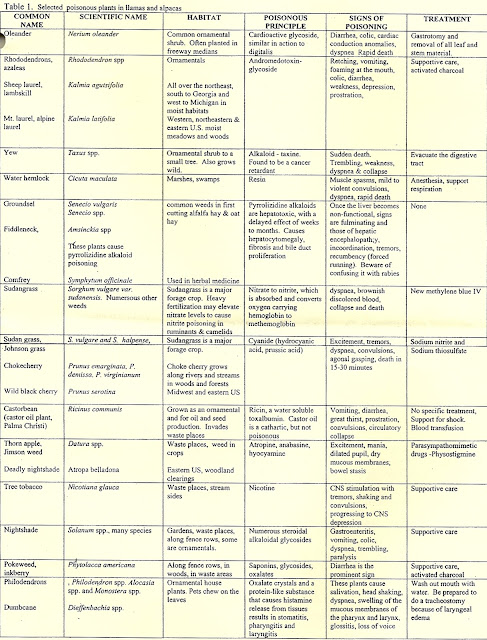 Posted by Vermont Llama and Alpaca Association at 4:47 PM