Basic Training From Nose to Toes!

Perhaps the scariest and saddest attitude or practice we encounter, on an all too regular basis, is that of well-intentioned llama owners who believe they are properly fitting halters when they are not and the common practice of ignoring overgrown nails. The serious neglect of proper care for nails and noses is not reserved for the new owners or those transferring their livestock practice from one breed to another. Many long time llama owners and breeders fail to attend to these incredibly important aspects of camelid life.

When to Halter Train 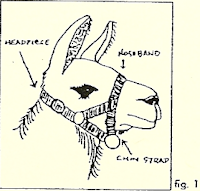 On our own farm, halter training a young llama occurs in stages. First we fit them to a halter in the confines of a small area-- typically when they are three to five months old and while mom is eating her daily grain ration. We repeat this step three times in a week period. Each time the llama wears the halter for just 5 to 15 minutes, and no attempt is made to attach a lead. We believe llamas have the least difficultly in accepting a lead rope if they are walked with mom (and mom only) at an age in which they are still emotionally dependent on mom. Ideally, two handlers should be involved so that the cria has a personal trainer. The first walks consist of a trip around the lawn alongside the security of mom. Once the cria begins the social separation from mom, stage three begins. We will walk the cria/weanling with an older sibling or another cria/weanling now, exposing them to short stints slightly off the confines of the farm as they know it, e.g., a short walk on a road, into a nearby unfenced pasture, along a wooded trail. 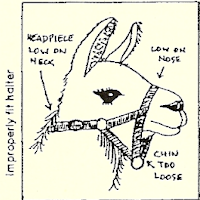 A well-fitting halter is vital to both the safety and comfort of your animal. Halters should be strong yet flexible so as not to cause abrasions on the nose, chin, or behind the cars. A properly fit halter (fig. 1) is one in which the noseband is high on the nose and somewhat close to the eyes without risking the movement into the eye if a quick pull occurs. Two to three fingers should fit comfortably between the chin of the animal and the bottom of the chinstrap... no more, no less. The headpiece should be high and just below the ears. It should not slide down the neck at all. Avoid the extremes: a halter that is too tight restricts the ruminant's ability to chew cud while a halter that is too loose is a disaster waiting to happen. A loose halter may slide down into the danger zone of a llama's nose, i.e., that area of the nose that is only supported by cartilage and not bone (fig. 2), resulting in llama panic and suffocation. If a training session is long or difficult, the fit of the halter should be checked periodically, as it is possible for adjustable halters to slip in a struggle. 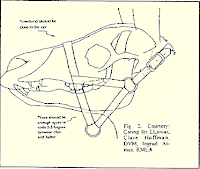 While x-style halters may work for trained llamas, they should not be used while training a lama. Should the animal pull, the noseband tightens and could result in panic. During training, any tension felt in the halter should be felt on the back of the head (on the headpiece strap).
Halters should never be left on for extended periods of time. The only exception to this may be while traveling, at a show, or at an event. In these cases, it may be in the best interest to leave a halter on for the safety of the animal should there be an accident or an escape where an animal would need to be moved quickly or caught. At these times, it may also be necessary to give them a hair more than the two to three finger rule of space to encourage them to relax enough to chew their cud comfortably.

Nail needs vary tremendously from animal to animal, and from farm to farm, depending on the individual animal's nail growth rates and depending on the types of surfaces the animal typically walks over. All too often, we have visited farms where nails are beginning to curl under, impeding the entire process of picking up a llama's foot to work on it because the owner lacks the knowledge of how to trim the nails. The clear implication is that if the owner is a breeder, animals will be sold without training the buyer in basic foot care and a new generation of neglect is begun!
We were originally taught how to trim nails by a veterinarian from the Baltimore Zoo while at a GALA conference years ago. The best advice we received was in how to plant one human leg between the two llama legs (whether front or rear) while facing the rear of the lama. This leg serves several purposes: it lets the llama know who is in charge, it is less stressful to the llama due to the added support of his/her body while on three legs, and it positions the owner closely so that the foot is easily accessible. The front leg can be grasped comfortably and folded so that the foot is face up. Nail clippers then lie on the pad of the foot while clipper tips face the rear of the animal. First, snip off either side of the nail, then snip off the tip in two to three swipes. Lastly, we snip off a tad extra from the very tip. The finished nails should be even with the pad. Don't panic at the sight of blood. The quick tends to grow downward and it is not uncommon to catch a bit of the quick. If bleeding does not stop shortly, more attention may be required. When trimming the rear legs, be sure to tuck the leg (hock joint) strongly into your own body while firmly grasping the lower portion (fetlock joint) for trimming; our animal will relax sooner with a firm immobilization of his/her leg. Most animals have a preferred side; start there.
Posted by Vermont Llama and Alpaca Association at 4:20 PM