Cases of moderate to severe reaction to poison ivy, poison oak and poison sumac are on the rise. Lewis Ziska, Ph.D., a weed ecologist at the U.S. Department of Agriculture in Beltsville, Md., says, "In the last 50 years, the growth rate of the poison ivy plant has doubled. About 80 percent of people are sensitive to poison ivy, meaning they will develop a rash if they come into contact with the plant."
According to another study by the U.S. Department of Agriculture, climate change isn't just upping outdoor temperature and warming the oceans. It also may greatly increase a farmer's chance of getting a really bad case of poison ivy. Due to a rise in carbon dioxide in the atmosphere, the growth rate of poison ivy has increased. These elevated carbon dioxide levels are creating bigger, stronger plants that produce more urushiol (pronounced oo-roo-shee-ohl), the oil that causes the allergic reaction and miserable rash. The urushiol isn't just more plentiful; it might also be more potent and powerful. Because this sap is inside the plant, brushing against an intact plant will not cause a reaction. But, it's rare to find a plant that is undamaged.
"All three plants are very fragile," says William L. Epstein, professor of dermatology, University of California, San Francisco. Stems or leaves broken by the wind or animals, and even the tiny holes made by chewing insects, can release urushiol.
Farmers who work the land or raise livestock where this noxious plant thrives should be aware of the effects of poison ivy and its cousins. Clearing fencerows, removing underbrush from surrounding pastures or cutting trees where vines erode all create problems for those allergic to the plant. Farmers who raise livestock face another problem: cows that wander into thickets and undergrowth and must be herded out. 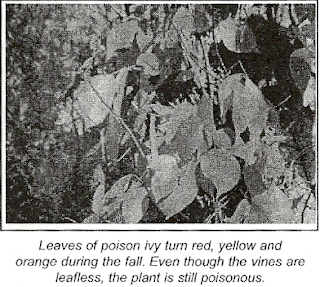 Identification of the plant

You've heard the age-old advice, "Leaves of three, let them be." However, some of these plants have leaves in groups of five to nine. Learning to identify these plants may mean the difference in being able to perform work-related farm chores or having to stay indoors with an itchy rash.
Poison ivy (Toxicodendron radicans) usually grows as a trailing or climbing vine. The stems grow from branched, creeping horizontal rootstocks, which can spread several yards from the parent plant, sending up new shoots. Alternating on the stem, the leaves are compound and borne at the end of a stalk. Each leaf is composed of three shiny, oval, pointed leaflets, which are often reddish when young, becoming glossy dark green in summer. The edges may be smooth, toothed or lobed. Clusters of small greenish flowers appear in summer, flowed by round, ridged, cream to yellow fruits that are .25-inch wide. The foliage turns bright orange to scarlet in the fall. It grows in woods, lakes and streams in the South. Midwest and East.
Poison oak (T. diversilobum) differs in that it grows as a dense, leafy shrub in open or partially shaded areas: in deeper shade it becomes a vine, climbing with aerial roots. Like poison ivy, it has extensive creeping horizontal rootstocks. Its leaves are also compound, made up of three leaflets, although at first glance the leaflets look like individual leaves. The margins of the leaves are scalloped, toothed or lobed. The new growth is tinged red, usually becoming shiny green in summer, then turning scarlet in fall. In spring, the plant develops clusters of small, white flowers, which develop into waxy, white berries. It grows from New Jersey to Texas and along the Pacific coast.
Poison sumac (T. vernix) grows in boggy areas, especially in the Southeast. It appears as a rangy shrub up to 15 feet tall with 7 to 13 smooth-edged leaflets. Poison sumac has glossy pale yellow or cream-colored berries. 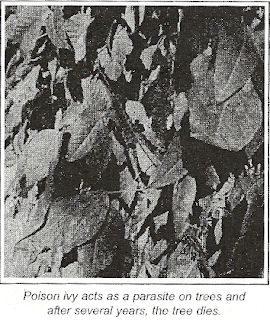 Farmers who have poison ivy on their land have resorted to a variety of ways to eradicate this vine. One is to turn a herd of goats loose on the plants. With their ability to climb, they'll also clean ditch banks and gullies where it would be difficult to use machinery. Animals are not allergic to the plant, only people. Plus, the goats work for food, not cash.
Two herbicides most commonly used for these noxious plants are Roundup and Ortho Poison Ivy Killer, but the products will get rid of surrounding plants as well. Spraying Roundup (active ingredient glyphosate) on the foliage of young plants will eliminate the poison ivy, but if the vine is growing up a tree of shrub, the Roundup will kill it. According to Joseph Neal, Ph.D., associate professor of weed science, Cornell University, says, "If used sparingly, Ortho Poison Ivy Killer (active ingredient triciopyr) will kill the poison ivy, but not harm trees around which the plant climbs. Keep away from shrubs, broadleaf ground cover or herbaceous garden plants." Neal explains it is possible to spray the poison ivy without killing other plants if you pull the vines away from the desirable plants and wipe the ivy foliage with the herbicide, or use a shield on the sprayer to direct the chemical. Another approach is to pull the vines away from the tree (using gloves) and insert the vines into a bucket filled with Brush-B-Con Brush Killer. The vine will carry the chemical down to the roots and die.
"Another removal strategy is to pull the vines away manually (with gloves)," says Neal. "However, you must get rid of every bit of the plant--leaves, vines and roots--or it will sprout again."
During the summer months when the urushiol content is high and the plants are easily bruised, the vines are most noticeable. However, the danger doesn't disappear when the leaves are gone. Reactions still occur for several years after the vine is dead. This is especially true for those burning firewood or cutting vines for wreaths. Even smoke from clearing land where the plants are located can cause those sensitive to poison ivy, oak or sumac to develop a rash. Inhaling the fumes or smoke can cause severe injury. 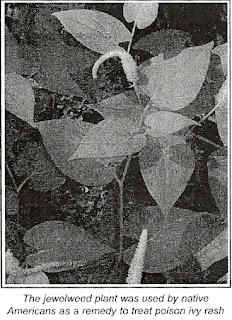 Protection from the noxious vines

The best protection from poison ivy is to avoid it. However, for farmers and others involved in agricultural careers and work in areas where the plant grows, avoidance isn't always possible. What can you do? Consider the following.
Act fast. Within minutes, the urushiol can penetrate the skin. Even in 10 minutes, the chemical starts to work. The sooner you remove the sap, the better your chance of avoiding the rash. Cleanse the skin as soon as possible with isopropyl (rubbing) alcohol. As alcohol removes your skin's protection, stay away from the plants for 24 hours or more so you will not be exposed again.
Next, wash the skin with running water (without soap). By avoiding soap, the urushiol is not spread around to other areas of the skin. Remove all clothing exposed to the sap and wash immediately. Wipe off shoes with rubbing alcohol. Use rubber gloves to remove clothing and discard the hand coverings. After this step, take a regular shower with soap.
Any tools that come in contact with the plant should be wiped with alcohol, then dried and oiled to prevent rust.
If farm work requires you to come in contact with the poisonous plants, always wear long pants and long sleeves, and if possible, gloves and boots. When pulling vines, wear cotton gloves under plastic gloves. Plastic may rip, and cotton alone will soon become soaked with the sap from the plant.
Depending on your reaction to the plant, the rash can last from a few days up to two to three weeks. Although the rash is not potentially serious, getting poison ivy can cause a week or more of intense itching. Plus, the rash can raise your risk of potentially serious skin infection or secondary infection from scratching the skin.
If a rash develops, outdoor work during the summer months causes increased itching. Staying indoors in an air-conditioned area allows the rash to subside.

Dealing with the rash

The American Academy of Dermatology recommends that people who have had severe reactions in the past should contact a dermatologist as soon as possible after a new exposure. The FDA considers over-the-counter topical corticosteroids (commonly called hydrocortisones under brand names such as Cortaid and Lanacort) safe and effective temporary relief of itching associated with poison ivy.
One home remedy is to use Tide washing detergent on the rash. Mix 1 tablespoon detergent and enough hot water to make a thick paste. Apply to the rash when it first appears and begins to itch. Avoid the face area due to sensitive skin. Leave on for 10 to 20 minutes. Usually, this relieves the itching and the skin can heal quickly.
For farmers out in the field who have been exposed to poison ivy, use a jewelweed plant to prevent and lessen the exposure. Slice the stem, then nib the juice inside on exposed parts, which will promptly ease the irritation. Jewelweed soap can be found at health food stores.

While farming and working around livestock, you have many opportunities to come in contact with poison ivy, poison oak and poison sumac. Each person reacts in a different way and the reaction can vary throughout life as your immune system changes. There are many products on the market to help relieve the rash and blisters, but avoidance is still the best policy.
Posted by Vermont Llama and Alpaca Association at 8:49 PM