Training Llamas to Back: An Easy Method

During my years as an ALSA judge, I generally enjoyed watching performance classes, as long as the llamas were well trained. But I have to confess, most of the time, I dreaded seeing what happened when the contestants came to the required backing obstacle; for too much of the time, it looked like a wrestling match. So often the handler would pull the lead rope back along the llama's neck with the rest of the rope pressed against the front of the neck, push, push, push--with the llamas just pushing back in resistance.
Years ago I devised a very simple method for teaching llamas to back easily, by relying on the fact that llamas naturally back out of tight, or enclosed places. Chutes are a common example. It was notable that my large pack gelding, Julio, who worked for the Forest Service, without hesitation backed out of the very high, narrow trailer they transported him in, because it was impossible for him to turn around.
The sequence of pictures and the steps describing the procedures below will help illustrate this easy method. 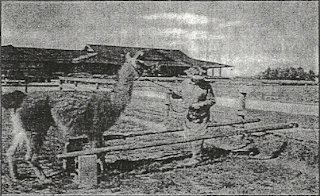 Fig. 1 – First, using two poles about 10 feet long, set them up about 30 inches apart and at about 18 inches off the ground. I use two cinder blocks, which have slight dips in the ends, which prevent the poles from rolling off, should they be touched lightly. Lead the llama into the narrow space till you and he can go no further. 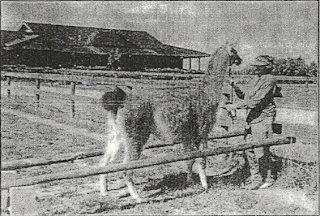 Fig. 2 – Give a very light signal with the lead rope and at the same time, point with your finger at the llama's lower neck or chest. IF your llama is not yet very desensitized in that area, just pointing at him there will cause him to take a step backwards. If he is not sensitive to the pointing, then touch him or lightly pluck a little pinch of wool, just enough to cause a bit of annoyance to make him move a foot. Step towards him as he does so, repeating the intermittent, very light signals with the lead rope and pointing still, as he continues to move backwards. 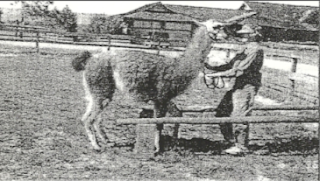 Fig. 3 – Continue with the intermittent, light signals with the lead rope and move forward as the llama moves backward. If you want to use the verbal command of "Back," along with the light signals from the rope, say it as he moves. Be sure to praise your trainee as he responds properly. I use verbal praise and stroking on the neck. 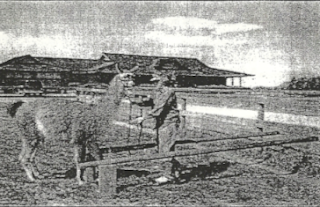 Fig. 4 – When the llama has backed out of the narrow space between the poles, praise him and lead him back in to repeat the exercise. As with most llama lessons, it usually only takes four repetitions till he understands and obeys the commands. If he has learned this quickly, move on to the next step, below. 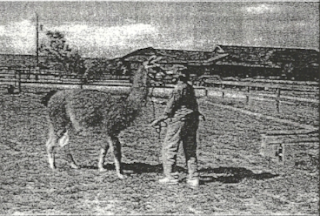 Fig. 5 – Once your trainee is moving smoothly out from between the poles, back him in open space, using the same signals. Again, praise him well for responding. If he backs easily now, stop the lesson and turn him loose in his usual living place, which is the best reward he can have after his lesson. When the llama is backing in free space, you can easily govern the direction he backs by controlling his head, moving it to your right to back him left, or to your left to back him to your right.

Try this method and enjoy hassle-free backing!
Posted by Vermont Llama and Alpaca Association at 3:11 PM