All Hay Is Not Created Equal 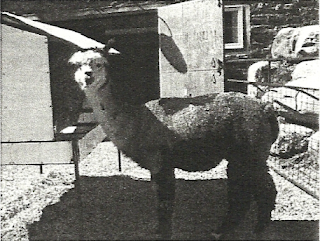 You are what you eat. So are our camelids. Since our grazing season is so short and so many farms are raising their animals on either a dry-lot or a pasture that is overgrazed, we rely on hay to feed them. It is important to feed them quality hay or you can end up with thin or unhealthy animals.
In Vermont, hay comes in 1st, 2nd, and sometimes even 3rd and 4th cuts, depending on the growing season and the weather at cutting times.
First cut hay is coarse with a lot of grasses and doesn't have a lot of legumes, such as alfalfa and clover. It may have quack grass, timothy, and brome. It may be weedy too. It dries quicker.
2nd cut hay is very rich in nutrients and has higher protein. It is greener than the 1st cut. It smells sweeter as well. You have to rake and dry this crop of hay more than the 1st cut because it is heavier and thicker. Also it is more likely to rot or catch fire if baled wet.
3rd cut hay is really, really thick and green. It is rich and has a really sweet smell to it. It has a lot of legumes and less grass, which may be harder to digest. It is more difficult to dry.
Llamas and alpacas typically eat 2nd cut hay, whereas cows, horses and goats usually do well on 1st cut hay.
The best time to evaluate hay is before you buy it. Ideally, you'd want to go out to the field before it is cut and see the plants and the stage they are in. Or you can go once it is cut and on the ground before bailing. But for most of us, summer is our busiest season and we're lucky enough to get the necessary things done and get the hay in the loft. In that case, you can spend some time over the winter evaluating your hay and deciding if your source is worth sticking with.

Here are some quick tips to evaluate your hay:


Like anything, we can only do our best within the confines of everything we are doing in our lives. Thus, most of us cannot obsess about our hay. If all that time allows for are the first four of the list above, you can get by fine, as long as you monitor your animals for condition and vibrancy and make adjustments accordingly. But if time does allow, finding and securing an excellent hay source is well worth it.

Karen Nicholson, of Stepping Stone Farm Alpacas in Stowe, VT, has a herd of nine alpacas, two French Alpine dairy goats, Indian Runner ducks, broiler chickens and several laying hens all integrated into their farm management program. Any comments or questions can be directed to: stowealpacas@gmail.com.
Posted by Vermont Llama and Alpaca Association at 2:33 PM