When you put something sharp into a llama, it is a no-brainer: he is going to move. That is simply a Law of Camelidynamics! So, in order to give an injection, we must hold the llama still. The problem with this approach is that restraint gets everybody all worked up before you even get started! Imagine how you would feel if you were physically restrained to get a shot. I know that absolutely couldn't stand it.


With most medical procedures, the animal never has a chance to actually experience the procedure and react to it; the restraint is always applied before the procedure is even begun. The wilder and more difficult your llama is in the chute, the more likely he or she will be better off without it!


The needle for a subcutaneous injection is placed under the skin a half an inch, maybe less; for an intra-muscular injection an inch, maybe a bit more. I don't care how strong you are or how good your chute is, you cannot restrain a llama in a manner such that he is incapable of moving an inch. Because of the llama's long neck, it is very difficult to eliminate bodily movement by tying the head — even when the llama is inside a chute.
No matter how you truss the llama up when giving an injection, you must be prepared to move with the llama or he is going to move away from and off the needle. Since you have to learn to move with the llama anyway, why not simply contain the llama instead of restraining him? My no-restraint method offers many advantages:
Get Organized

It is important to be organized when you are doing herd health. Being organized makes you feel competent, and also makes you appear competent to the beings that are on the other end of the needle. You will be able to work more quickly when you are organized, which is important for you and doubly important to the critters waiting their turn.
Imagine going to get your flu shot. The nurse sits you down but you have to wait for 15 minutes, and then he can't find the needle and finally after fumbling around for a few minutes, asks you, "Weren't you just in here a minute ago? Didn't I just give you a shot?"
Even if you have a chute, the easiest way to give injections is still in a catch pen. When doing herd health, put as many llamas as will comfortably fit inside the catch pen. The llamas should be on the crowded side — 8 to 10 alpacas or 5 to 6 llamas in a 10 x 10 pen are not too many. They won't be in there for long. If you have a small lumber of llamas — only 2 or 3 — you can make your pen smaller with bales of hay or use a mini-catch pen.
I like to crowd the llamas up when giving shots for two reasons: first, they slow each other down, making it easier to give the injection as the animal moves, and second, a llama feels safer in a group and tends to act out much less. Hang a bag of hay inside the pen, or if you are so inclined, a bag of hay in each corner of the pen. More llamas = more hay bags.
Before your llamas are even in the pen, draw up all your injections. Put your syringes and record-keeping clipboard in a place where you can reach it while standing inside the pen. A small table just outside the pen is perfect.
Wear an apron with a pocket in it for your syringe(s). A carpenter's apron is ideal. Remember; always keep the cap over the needle until it is time to use it. Keep all the llamas in the pen even after you have given them the injection, unless you have a rabble-rouser. Give any troublemakers their injections first and shoo them out.
Write down the name/number of the llama and what you gave immediately after you give the injection. I think it is also a good idea to write a brief comment about how the llama behaved. In this way, you can track your progress. If you are giving multiple injections to the same animal, I recommend that you give both injections one after another to the same llama rather than giving a round of med. #1 to everyone followed by a round of med. #2. I think the llamas have a sense of being done and relax more completely using the first strategy. If you have a larger herd, you can gather the whole group into the holding pen and then move groups of 8 to 10 into the catch pen, letting them out to the field when the group is finished. Using this system, no llama is ever alone, but you don't have to keep the entire herd confined the whole time. 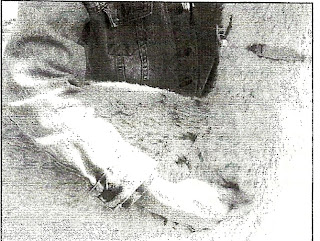 The trick to giving injections without restraining the llama is knowing which way the llama is going to go. In this way, you can move with the llama as you continue giving the injection.
Stand at center of the pen and approach your "injectee" from behind the eye. Walk directly up to the animal, reach across the body to the opposite side (see following description of preferred injection sites) and get yourself a big handful of wool. Grip the wool and roll your hand so that your knuckles are against the body (see above photo). The wool acts to pull the skin away from the body and creates a skin tent. Insert the needle just behind the pad of your thumb and you will inject the medication into the skin tent.
Prevent your animal's attempts to turn to the outside and change direction by using your hip to bump the rear end of the animal to the outside. This action pivots the llama around his center of mass and keeps him moving in the same direction. With your llama moving around the outside edge of the pen and you in the center, it is easy to keep up with the llama's movement as you inject the medicine. 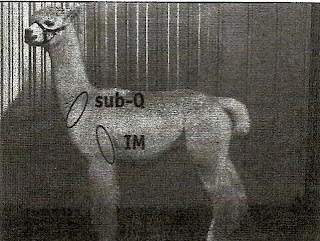 Before giving an injection you need to know where to inject. There are injection sites located all over the body; some work for no-restraint injections and others won't.
Stick something sharp in a llama's rear end and you can be sure he will do one of two things: move forward and maybe kick. Unless you stop the llama from moving forward, it is very difficult to keep the llama from walking right off the needle. Stop the llama in the front. Stick something sharp in his butt and he rears up or bucks — also not good.
I realize the muscle mass of the hind leg is bigger, but I still prefer the front half of the body for injections unless it is not possible. Some veterinarians like to use the armpit. I don't like this site because it is difficult to use without restraint. Sometimes there is no perfect choice. Provided the site is safe, I am going to opt for the one that is easiest for the llama.

Subcutaneous Injections (sub-Q or under the skin)

This is the easiest medical procedure there is. Most medications, even antibiotics, can be given this way. Give sub-Q injections as low on the front half of the body as possible. As much as possible, keep injections below a line drawn between the point of the shoulder and the point of the hip. I like the area just where the neck and shoulder come together. The skin is relatively loose in this area and there are no bones or major vessels to worry about. This site makes it very easy to go with the llama when he moves. The crease of the neck is also an easy place to check later for a reaction and is an easy place to treat in the unlikely event there is a reaction to the medicine.

The site for an IM injection is a bit different, although still in the front half of the body. I prefer the back of the forearm (triceps muscle). Dr. David Anderson of the Ohio State University prefers sites in the front for two reasons:
**Of course, you should consult with your veterinarian about health care. When llamas are very sick and you must give large doses of medicine repeatedly, you may need to use injection sites all over the body, including the rear half. A sick llama is not likely to protest very much no matter what site you choose. When the llama begins to feel well enough to fight, I would switch to the front half and rotate from one side to the other.
You can read more about this technique and other non-traumatic approaches to herd management in Marty's brand new book, The Camelid Companion. For more about the book, clinics and equipment log onto Camelidynamics.com.

Marty McGee is the only officially recognized TTEAM instructor for llamas able to clarify TTEAM llama practitioners. Marty graduated from the University of Georgia with a degree in animal behavior. She has raised llamas since 1981 when she became interested in them for their wool. As a former professional fiber artist, Marty brings a well-rounded knowledge of not only behavior and training, but wool issues.
Since discovering TTEAM in 1987, Marty has taught hundreds of training clinics all over the United States, Canada, England, Europe, Australia, and New Zealand. Marty has been invited to present her llama training ideas at many veterinary schools including Oregon State University, Colorado State University, Purdue University, Iowa State, and Texas A&M. She has been a featured speaker at every major llama conference and was the only trainer invited to contribute to The Veterinary Clinics of North America Series on Llamas. She is the author of many articles on a variety of llama related topics and writes, or has written, regular columns for a variety of llama, alpaca, and TTEAM publications worldwide.
Marty has created a training video series and is the author of Llama Handling and Training, the TTEAM Approach, the best-selling training manual for llamas and has completed a full-color coffee table book entitled Llamas and Alpacas as a Metaphor for Life.
Posted by Vermont Llama and Alpaca Association at 11:35 AM