Historically, alpacas have never been a wild species. To date, no rogue herd of wild alpacas is known to exist anywhere in the world. It is thought that over the many years, alpaca behavior has adapted itself to a domesticated life with humans.
It is important to gain a basic understanding of the general dynamics of alpaca herd activity, as well as the dynamics specific to any one particular group of alpacas. This understanding can make it much easier to recognize the more subtle cues that may be cause for pause and further investigation. Without it, we have little to no solid foundation upon which to base an assessment. There are many generalities that could be noted as the more common behaviors in any random group of alpacas. There might also be behaviors specific to a particular group. Each group naturally consists of individual alpacas with individual personalities and traits. This unique, and often random, mix can also create behaviors that are specific to a particular herd or grouping.
Most alpacas are very herd oriented. They normally prefer the company of other alpacas as opposed to that of another species. In a mixed herd of suri and huacaya, it is not unusual to find the suri alpacas moving or sleeping together as a group and the huacaya alpacas together as a separate group. While they definitely do well together in a mixed group, it appears they may clearly see a difference. Social interaction is ongoing between individual alpacas and entire groups. Group security and support can even allow for a compromised alpaca to appear "normal." 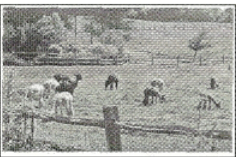 A single herd or herd groups (as shown) have an intricate social structure. Alpacas have social as well as health and welfare needs. Through observation of body language and various behavioral cues, you may be able to note pieces of the social order in a particular herd. There may be specific family groups, ones who are good friends, some that do not get along well, leaders, followers, guards and even “baby sitters." Mothers teach their babies a great deal about appropriate alpaca behavior, as well as warn them of potential dangers-- including possible humans. Some mothers are very attentive and constantly keep track of their cria. Others are much more casual in their attention and care. The herd will take an active role in raising and disciplining young alpacas. Growing youngsters often receive a quick spit from elders as they learn boundaries and appropriate behavior. Sometimes specific family lines hold a higher or lower place in the herd.
Anytime dynamics in the social structure are changed, there is a period of adjustment and reorganization. Many alpacas will visibly mourn the death of a fellow alpaca and certainly that of their own offspring. Exchanging herd members through buying and selling can be stressful for a herd. It can create momentary difficulties and shifts. Is it possible we have just sold the guard in a particular group and another must step into that role? Have we sold another's close companion? A new alpaca coming into a herd will often struggle for a time as it tries to gain acceptance, make new friends and find its own place within this "new" herd social structure. While it would not seem possible to eliminate these disruptions, it is important to notice any obvious difficulties and to mitigate them where possible. There have been instances wherein a new addition to the herd is not readily accepted, resulting in ill health and even death.

To consider what may not be usual, we must first have a basic understanding of what is the ongoing norm within a particular group of alpacas. It is important to know the animals, both as a herd and as individuals. What are the usual groupings? Are some close pasture mates while others may not get along well? Are some at one feeding station and never at another? Is anyone a loner? What is the seeming social structure? Who seems to rule the pastures and who might seem to cling to that last rung? What is the usual activity for the alpaca holding those positions and what is the usual activity for those in that range in between?

With a general understanding of the dynamics within any specific herd or group of alpacas, it becomes much more obvious when something may require further investigation. Is one who is not normally a loner now off by himself? Is the herd queen suddenly seen to be weaker, receiving spit from much more neutral herd members and backing away? When moving the herd, is one who is normally out front or in the middle of the group now one of the stragglers? Is the entire herd up and about grazing in the morning sun while one remains kushed in a shelter? A more subtle question: Is the entire herd up grazing and only one is kushed right there amidst the grazing group?
This group of alpacas is grazing in the morning sun with only one member kushed. It is a gorgeous day and the herd has moved all together, out to the pasture. Seeing this positioning from a distance, it might be easy to assume this lone kushed alpaca is simply resting...enjoying the warmth of the sun. She is right there amidst the group. Though her neck is a bit forward and not as upright as would be the norm, she is kushed upright and her ears appear to be resting at half-mast. Might she just be enjoying a lazy summer morning?
In this instance, the strong behavioral cue that something may not he right is that she would be kushed at all when the remainder of the herd is up grazing. This cue is supported by the subtler cue that she is holding her head and neck more forward than the norm. Taking a closer look will help determine whether she is fine or whether there might be a potential problem. As a side note, I have received many calls and letters from alpaca owners around the world who have become aware and acted on this very cue. More often than not, they have discovered a problem. They have expressed sincere appreciation that notice of this specific behavioral cue made it possible to discover an issue in the earlier stages, thus potentially life saving.

Upon closer inspection, this little gal may not be well. Her head and neck are held farther forward than normal for the usual upright kushed position. Her body is somewhat hunched with her legs appearing uncomfortably hugged in beneath her. Notice the outline of her face. The lower lip is clearly pulled back, indicating a tensing of muscles in the face. While shadows make it difficult to tell in the photo, the obvious tensing of facial muscles, indicated by her lower lip, would have likely caused drooping of the eyelids.
An often-repeated phrase throughout the alpaca community is, “Alpacas are very stoic. It seems that by the time they truly show they are ill, they are really ill." As keen observers of alpaca behavior -- the subtle behavioral cues expressed as individuals, as well as in relationship to a herd group -- we add an important dimension to our skills as herd managers, handlers and trainers.
The behavioral cue of only one alpaca kushed while all the other herd members are grazing is quite subtle, yet very significant. Does what we observe or think we observe mean that it is? Perhaps. And then again, perhaps not. What is of serious importance is that we have noticed something and acted upon it. In addition to the notice of specific cues or indicators, it is important to consider the positioning and surrounding circumstances in which any cue is noted. Behavioral cues can mean different things with different animals at different times in combination with different accompanying cues.

Cathy Spalding and her family live in Olympia, WA where they enjoy their herd of 18 llamas and alpacas. With over 20 years experience, Cathy has a wealth of expertise in camelid behavior and training. She has written numerous articles, produced publications including the camelid behavioral textbook on CD-ROM, "Llama Talk" and "Alpaca Talk."
Posted by Vermont Llama and Alpaca Association at 4:13 PM